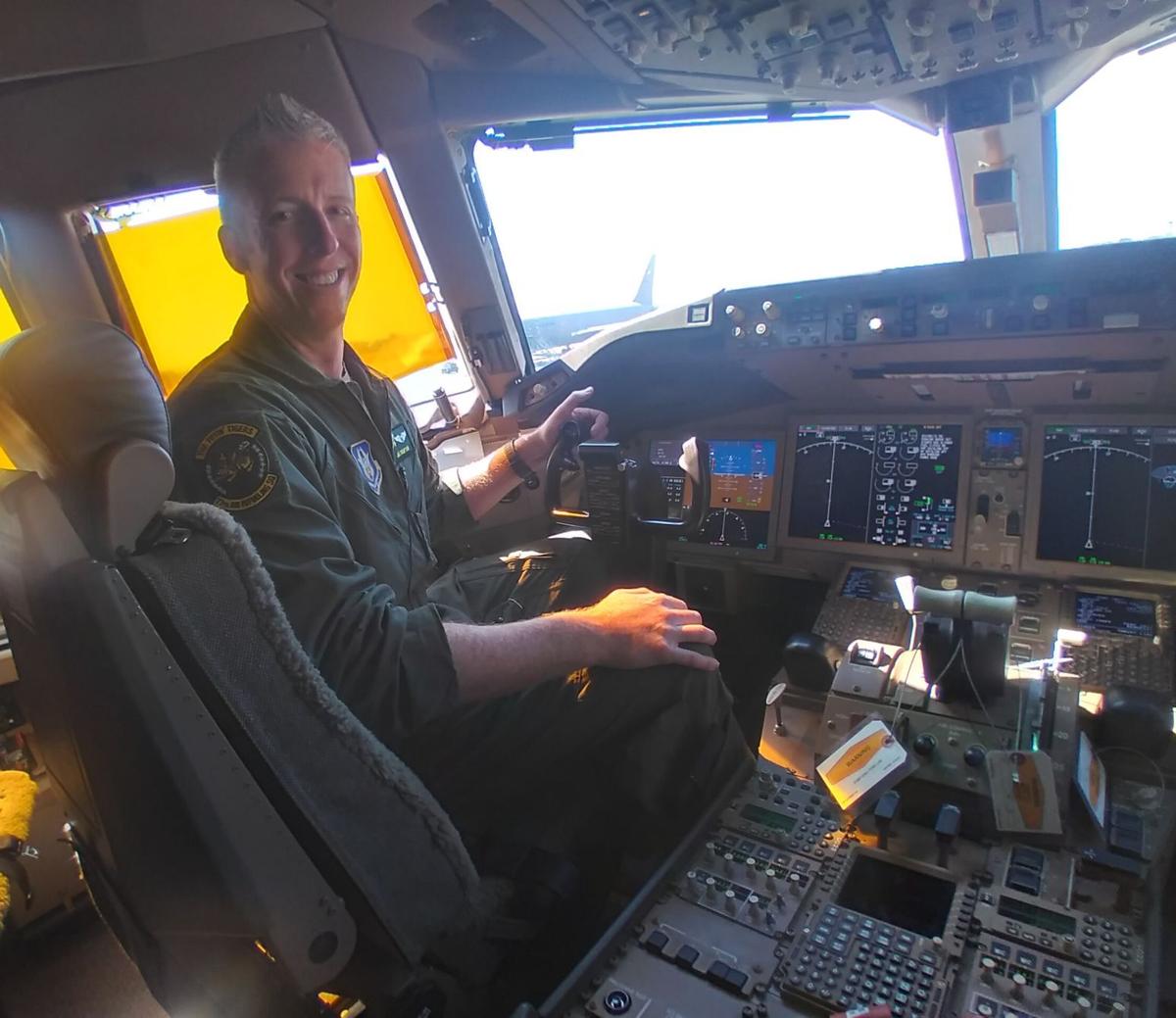 Capt. William “Jag” Thompson, 916th Air Refueling Wing pilot, sits in the cockpit of the KC-46 Pegasus, which offers some of the latest technology and safety upgrades. 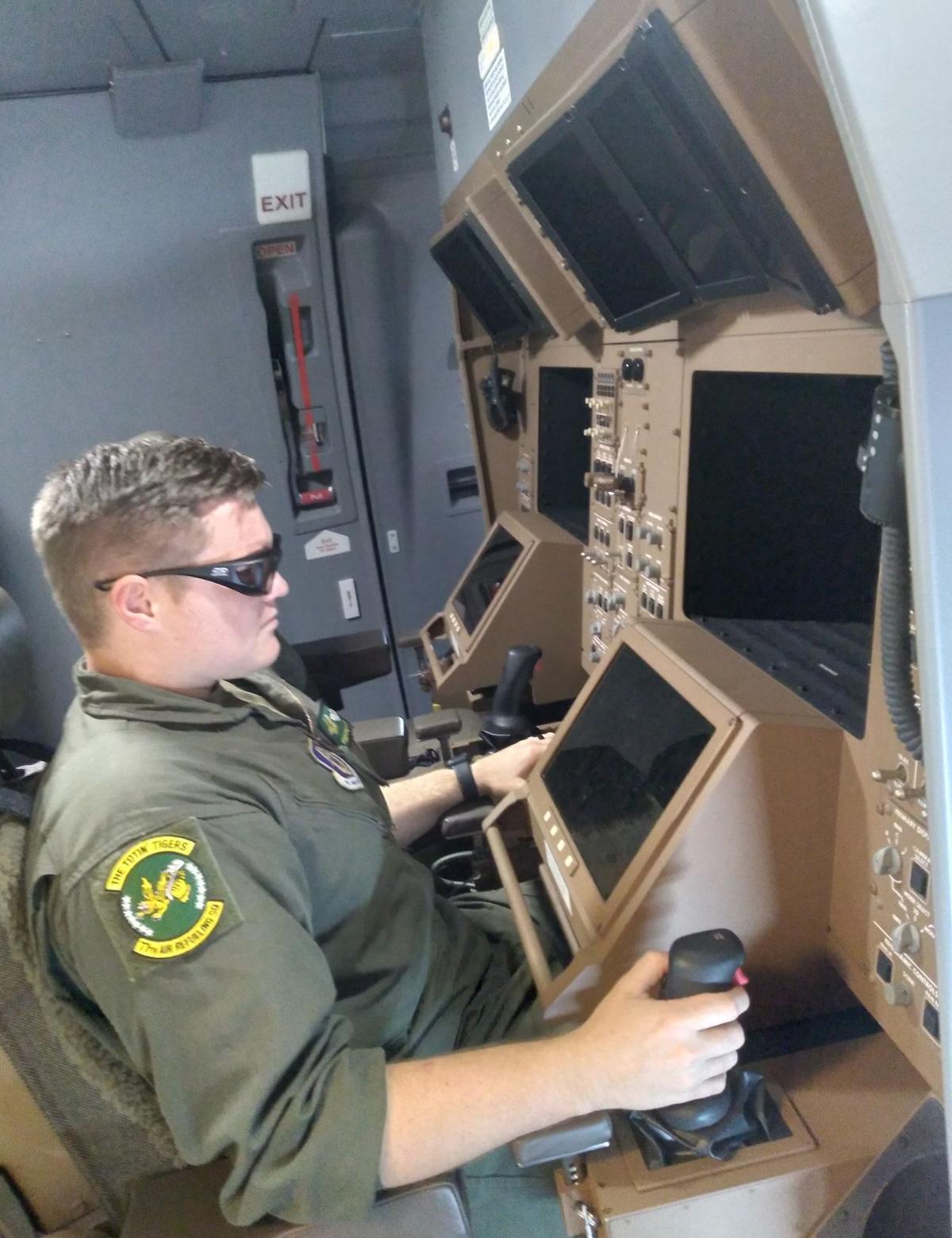 Technical Sgt. Dan “Perma” Frost, 916th Air Refueling Wing inflight refueling specialist, sits at the boom operator’s station on the Pegasus. In the old K-135 aircraft, the boom operator would lie down in a small boom pod in the back of the aircraft to refuel other aircraft. 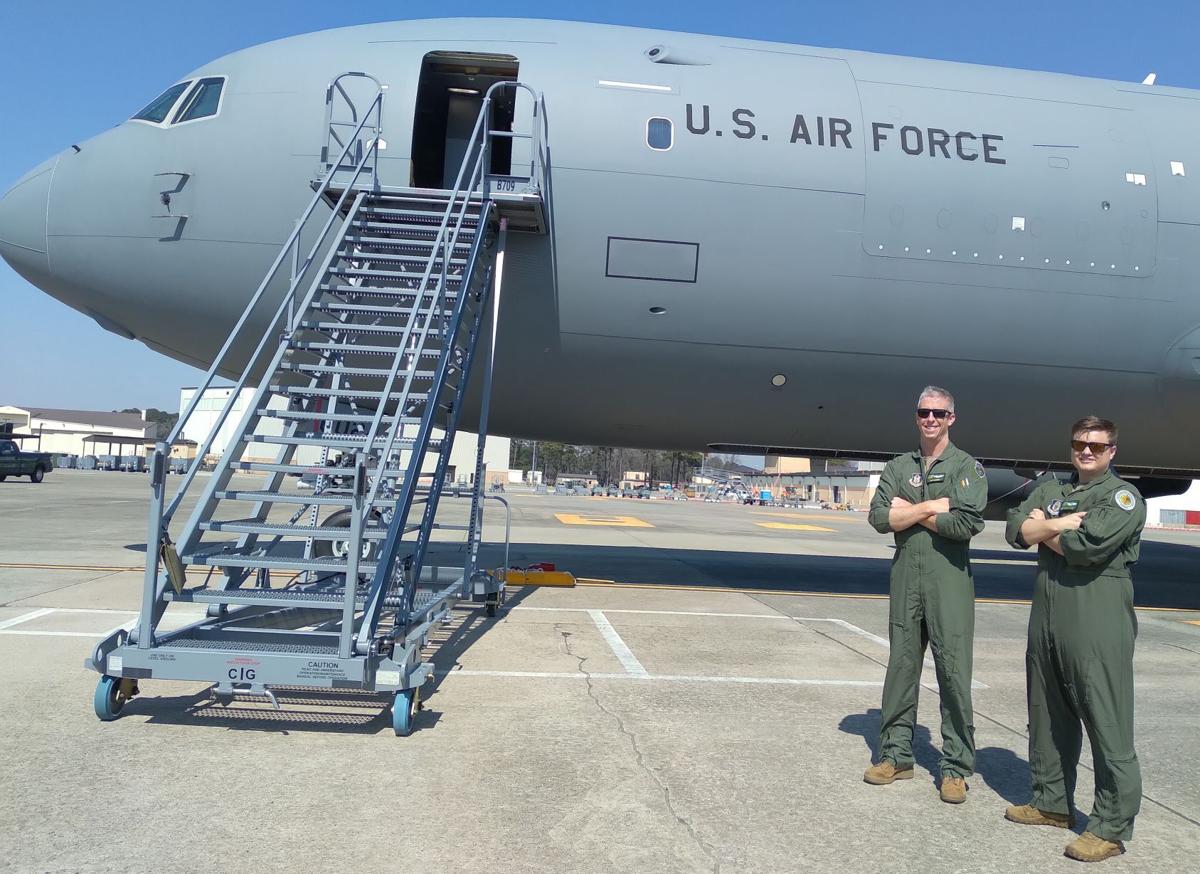 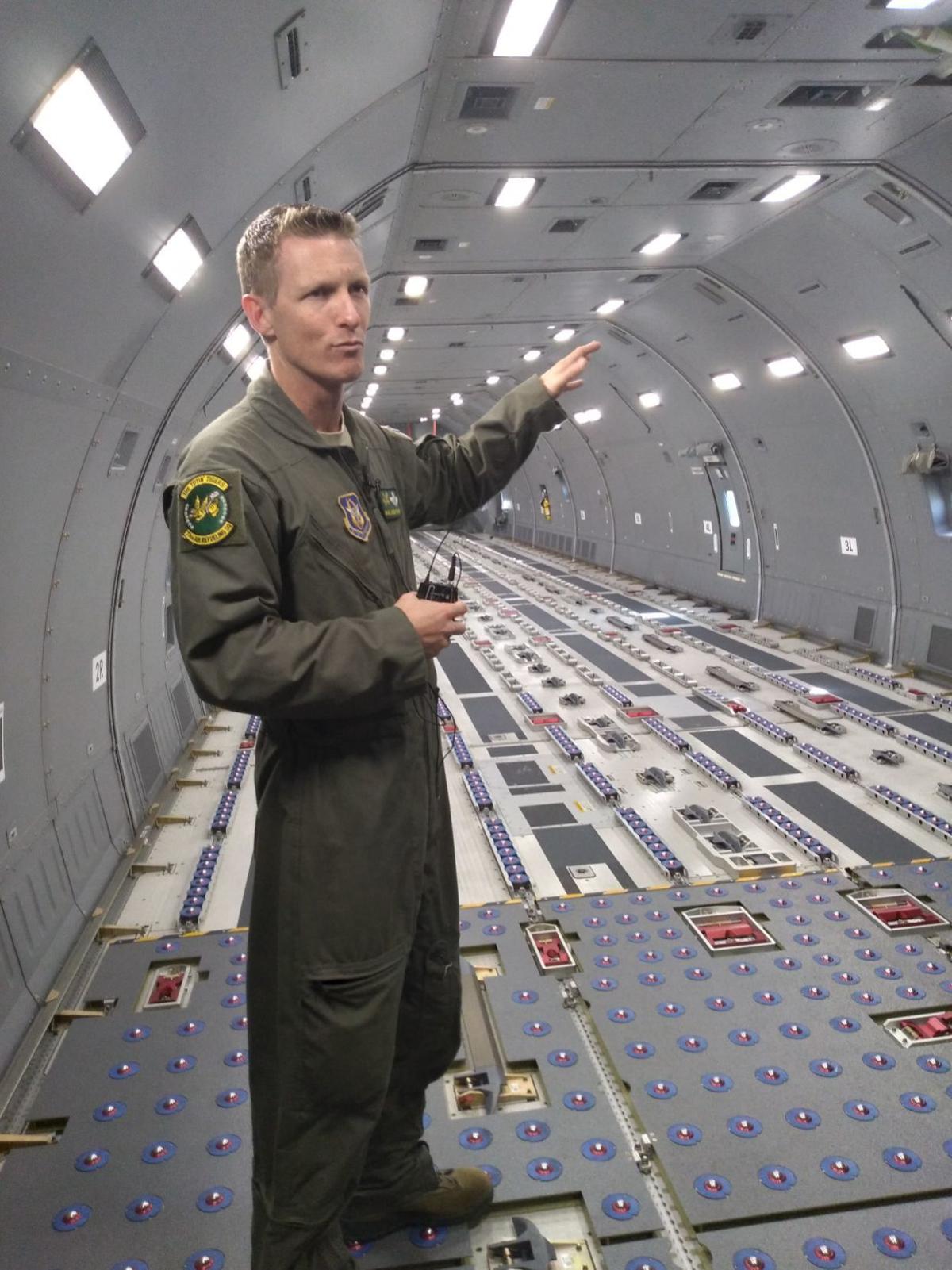 Capt. William “Jag” Thompson, 916th Air Refueling Wing pilot, sits in the cockpit of the KC-46 Pegasus, which offers some of the latest technology and safety upgrades.

Technical Sgt. Dan “Perma” Frost, 916th Air Refueling Wing inflight refueling specialist, sits at the boom operator’s station on the Pegasus. In the old K-135 aircraft, the boom operator would lie down in a small boom pod in the back of the aircraft to refuel other aircraft.

On one mission, it could be a flying gas station.

On another, it can be a flying hospital.

And it can also serve as a cargo-personnel transport aircraft.

The new Boeing KC-46 Pegasus, a military aerial refueling and strategic transport aircraft, has proven to be versatile.

The 916th Air Refueling Wing at Seymour Johnson Air Force Base received its first KC-46 almost a year ago, in June 2020.

The wing now has five of the 12 aircraft it is scheduled to receive by the end of the year.

The Pegasus replaced the KC-135 Stratotanker, which had been in service since June 1957, a little more than 60 years.

During a recent tour of the aircraft, some flight crew members and maintenance personnel explained the missions and features of the Pegasus.

One of the biggest changes from the KC-135 is the location of the inflight refueling station on the KC-46. In the KC-135, it was a refueling pod in the very back of the aircraft. The boom operator would have to crawl down into the pod and lie on his or her stomach with chin propped up to refuel another aircraft.

“We’d use a thick glass window to lay down and look at the receiver,” said Technical Sgt. Dan “Perma” Frost, 916th ARW inflight refueling specialist, who flew on the KC-135 for almost nine years. “A lot of us had neck and back issues on the (KC-135) because we’d be lying there with our chin getting yanked up.”

On the Pegasus, the refueling station is located at the front of the aircraft directly behind the cockpit. And the boom operators sit in chairs to refuel.

“It’s much more comfortable,” Frost said. “A huge bonus for us is that we get to sit in a very comfortable chair, and the controls are much more ergonomic.”

“When you look at the screen, if you don’t have your 3-D glasses on, it’s blurry because it’s two overlaid images,” Frost said. “But once we put our glasses on, it becomes a 3-D picture for us to make our contacts (with the receiving aircraft).”

He said although it took a little while to get used to the 3-D effect, the boom operators really like using the new system.

He said there are also panoramic cameras outside on the bottom of the KC-46 that give the boom operator a wide-angle view of the aircraft being refueled.

“When we have receivers that are stacked up on our wing, we have to have a way to look at that,” Frost said. “In any condition, we can see our receiver aircraft — even if it’s completely dark out and we need to stay covert with our lights out, we can keep an eye on them. And they use their night vision goggles to see us.”

The boom on the KC-46 is 36 feet long with a 21-foot tube in the middle that extends out to refuel another aircraft, Frost said. And the boom is now electrically controlled, instead of using a cable, which is used on the KC-135.

“Once we’re in contact with a plane, a computer system takes over and flies the boom for us,” Frost said.

And if the aircraft needs to maintain radio silence during a mission, there are LED lights underneath the Pegasus that the boom operator uses to direct the receiving aircraft.

The KC-135 had regular light bulbs, which frequently burned out and, even when working, were very hard to see, Frost said.

Since the inflight refueling station is in front of the KC-46, the manufacturer didn’t have the difficult task of putting life support equipment in the back of the plane for the boom operator, which can be a challenge, Frost said.

Another enhancement in the KC-46 is that it’s a much quieter aircraft, Frost said.

“You’re not landing from a flight with your ears ringing,” he said. “A 10-hour flight in a (KC-135) would be brutal on your body, but this aircraft, you could do a 10-hour flight and then go play a game of basketball.”

There is also better communication between the boom operator and the rest of the crew in the cockpit with the inflight refueling station at the front of the plane.

“As a boom operator on the (KC-135), you’d have to disconnect from your communications, walk 120 feet to the end of the aircraft, then plug back in,” Frost said. “On this plane, I can kind of yell, ‘Hey, are we ready to start engines?’ or ‘Are we preparing to land?’ Communication is a lot easier.

“We have moved from a very old aircraft that was very capable to a brand new aircraft that is leaps and bounds with all its technology.”

Piloting the Pegasus is better for the pilots, too.

“The 135 was a tried-and-true workhorse,” he said. “I don’t ever want to say a bad thing about that airplane. It was my first love. It’s a classic design and built like a rock.”

He said with all the technological advances that have taken place over the past 60 years put onto the Pegasus, the KC-135 really can’t compare to it.

Thompson said the cockpit is more advanced with four big screens right in front of the pilots that display various information.

“The way the information is presented and displayed to the pilot is very smart,” he said. “On the 135, you had a lot of analog instruments, like on a wristwatch with fingers and points, and nothing digital.

“When you look at the clock on your microwave, it’s real easy to tell the time. Sometimes when you look at your wristwatch, you have to think about it for half a second. When you’re flying an airplane, it’s a lot nicer to just have that completely ready to you and right in front of you. That’s what these screens do for us.”

Thompson said there’s also a high level of redundancy built into the Pegasus, which he says is just a fancy word for being safe.

That includes three separate autopilots that all work together.

“The autopilots are so sophisticated in this airplane that it can literally be a completely foggy day at certain airports, and it can fly and land without any pilot intervention whatsoever and come to a complete stop right on the center of the runway,” Thompson said.

He said the KC-46 has speed brakes that help slow the aircraft down quickly or help it descend quickly. And it has a lot of fire protection with built-in fire extinguishers.

Thompson said the Pegasus is also bigger than the KC-135.

And instead of having four engines, as are on the KC-135, the KC-46 has two larger and more powerful engines.

“These engines are much more powerful individually than two of those engines on the (KC-135) were combined,” he said. “And there are better safety controls built into the KC-46 engines. You get a lot more bang for your buck with these two engines.”

Thompson said the Pegasus has three missions — it refuels other aircraft, has aeromedical capabilities and transports personnel and cargo.

“If you’re picking up on a theme of all of this, it’s flexibility,” he said. “Refueling is our tanker role, that’s the traditional role that’s synonymous with the KC-46.

“The best example of that is when we’re flying in combat with fighter jets. The jets are small, and because they are small, they can’t carry a lot of gas. Those loud engines, they burn a lot of gas. So they have very limited ability to fly on their own with their own gas.

“So where we come in, we fly into a combat area with them and allow them to remain on station much longer. Those jets can’t get from here overseas by themselves. The way they do that is they take the flying gas station, which is us, with them. They fly formation with us, and we can fly them all the way halfway across the world.”

The KC-46 can quickly be transformed into a flying hospital, transporting the injured.

“It’s a pretty impressive sight to see that they can turn this entire fuselage into a flying hospital,” Thompson said. “It’s got litter systems, oxygen systems, crew communications so the doctors and nurses can be back there and communicate with the pilots.

“From a patient care standpoint, it’s a fantastic aircraft because it’s much quieter. So you could imagine if you’re injured or sick, laying in a hospital bed, you want to be in a comfortable state.”

He said the KC-135 didn’t have air conditioning while on the ground, which could make conditions very uncomfortable for patients — and medical staff. And it was very noisy inside.

“This aircraft has air while on the ground,” Thompson said of the KC-46. “And it’s quiet. That’s fantastic for patient care, as well as for the interaction of the physicians and nurses that have to work with the patients.

“It’s a lot of body fatigue on them as they’re engaging in the medical practice, and they were wiping sweat off their brow and had to have earplugs in on the (KC-135). It’s a much more comfortable environment in the KC-46.”

The Pegasus is also a personnel and cargo transport.

“You can take all the hospital stuff out of the back and put a whole bunch of seats just like airline seats in, and we could load this thing up with troops and passengers and do whatever we need to do to get people from point A to point B,” Thompson said.

“Then we can take all the seats out and load up palletized cargo. So if we needed to, we could get food or supplies, things like that, to like a disaster area after a disaster worldwide. That’s a mission that we did in the (KC-135) and we can also do in the (KC-46). That’s a very diverse capability.”

One of the big differences between the KC-135 and the KC-46 is that the Pegasus not only gives gas to other aircraft, but it can also take on gas itself.

“So for whatever reason, mission extension or anything like that, if we are running low on fuel, we ourselves can go find another tanker aircraft, plug into that tanker aircraft, take on fuel and continue our mission,” Thompson said. “There were only a small number of (KC-135s) that could do that. All of the (KC-46s) have the ability to do that.”

“All in all, from a maintenance standpoint, we love it,” he said. “It’s very maintenance reliable.”