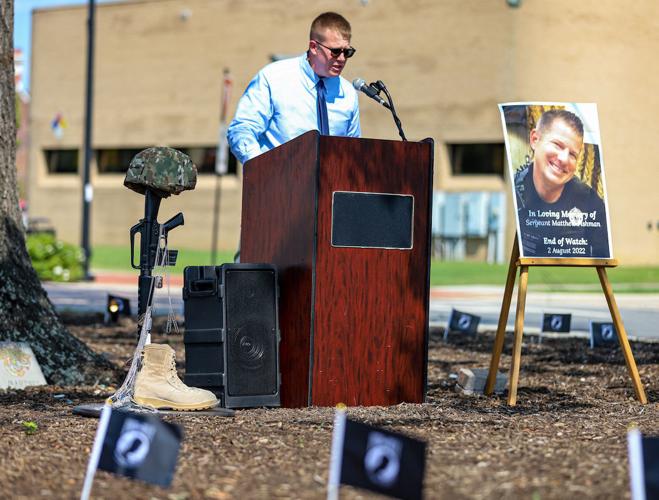 Technical Sgt. Zachary Dalton with the Air Force Sergeants Association Chapter 371, sponsor of the annual POW/MIA event in Goldsboro, talks about the event during the opening ceremony Sept. 15 in downtown. 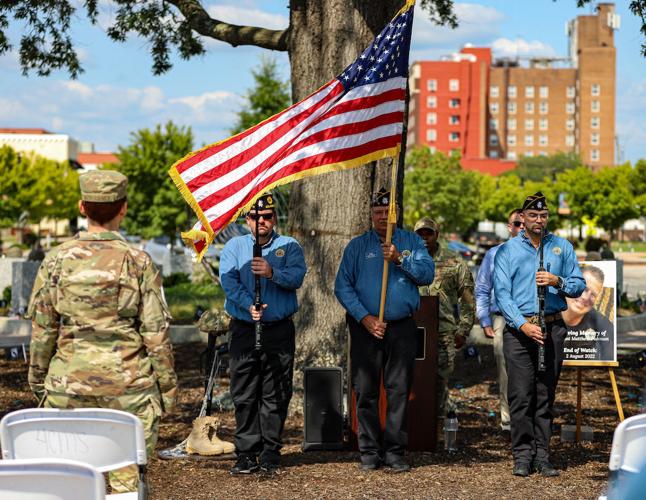 Members of the American Legion Post 11 Chapter post the colors during the opening ceremony of the POW/MIA event in downtown Goldsboro on Sept. 15. Pictured are, from left, David Kerr, post commander Ron Medus and Richard Aanerud. 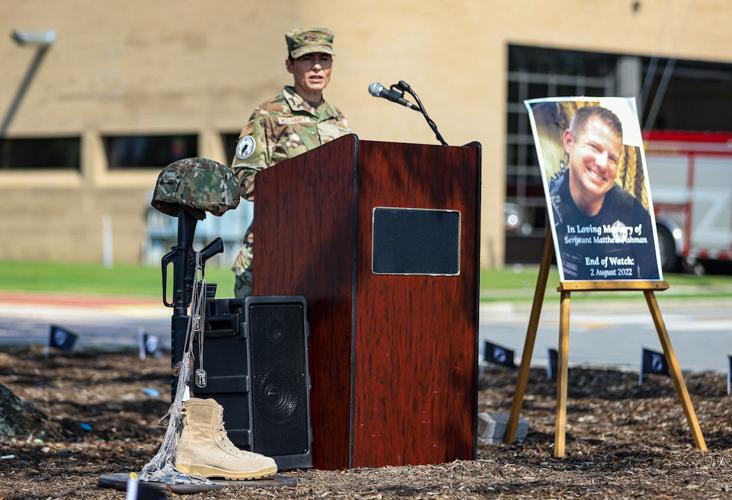 Technical Sgt. Zachary Dalton with the Air Force Sergeants Association Chapter 371, sponsor of the annual POW/MIA event in Goldsboro, talks about the event during the opening ceremony Sept. 15 in downtown.

Members of the American Legion Post 11 Chapter post the colors during the opening ceremony of the POW/MIA event in downtown Goldsboro on Sept. 15. Pictured are, from left, David Kerr, post commander Ron Medus and Richard Aanerud.

To remember and honor the memory of the more than 81,500 American men and women who are still missing from past wars, local Air Force Sergeants Association Chapter 371 hosted its annual POW/MIA recognition event on Sept. 15 on Center Street in downtown Goldsboro.

During the 24-hour vigil, airmen from Seymour Johnson Air Force Base and people in the Wayne County community carried the POW/MIA flag up and down Center Street from the Hub to the traffic circle on Ash Street, Sept. 15-16.

“We do this to remind everyone that those that are missing and their families are not forgotten,” he told those attending the ceremony. “There’s currently over 81,500 people that are still missing today.

“As the AFSA, we believe in focusing on yesterday’s sacrifice, serving today and preparation for tomorrow’s opportunities. And we want to remember those that came before us in the military.”

Dalton said it’s important to make sure that the families of those missing know that this country is still focused on trying to bring them home.

He also recognized Private First Class Dan Bullock, the youngest Marine killed in the Vietnam War, who is buried at Elmwood Cemetery in Goldsboro.

Following the event, members of the AFSA will present a donation to the family of Sgt. Matthew Fishman, a 38-year-old Wayne County Sheriff’s Office deputy who was killed in the line of duty here Aug. 28.

“Although he’s not a POW or MIA, he was a uniformed member of the community,” Dalton said.

He said he hopes the event would heighten awareness that there are still military members missing from several wars, and that they haven’t been forgotten.

“We hold these vigils so that way we remind everyone of our nation’s promise that our mission will never be forgotten, and that we continue to honor the sacrifice that they have made and that our search for the missing continues through investigation and identification so that we can return them to their families,” she said.

McElhaney said everyone can get involved in the efforts to identify and bring the missing home by researching those who are missing on the Defense POW/MIA Accounting Agency’s website.

“We need more people involved to find those family members,” she said. “They may not know that they have a missing loved one from the past and that could help in identification one day.

“I’m still serving in uniform, so for me to see this type of support from the community is always touching, but to also see that that promise is also there for me. This is very near and dear to me.”

McElhaney said events such as this one are very important.

“It not only shows that message of we will never forget not just our military, but our civilian community and still show that support to find missing military,” she said.

Following the opening ceremony, military members and civilian community members carried the POW/MIA flag up and down Center Street for 24 hours, while other volunteers read the names of the missing throughout the night.

First to carry the flag was Staff Sgt. Blake Anguiano.

“I like to do something to support the event,” he said. “Carrying the flag makes me feel like I’m playing a part in something.”

“We’re supporting this,” he said. “We are a community, so anything that we can do as a community, we want to support it. It’s not so much an obligation as it is something that you want to do.

“This is a big thing. If you had a loved one that was stuck somewhere, you’d want some support, too. I can only feel for them in my heart.”

“I will carry the flag to honor those that made all the freedoms that we have today possible,” he said. “Right now, until that flag touches my hands, I have no idea how it will feel to carry it around.