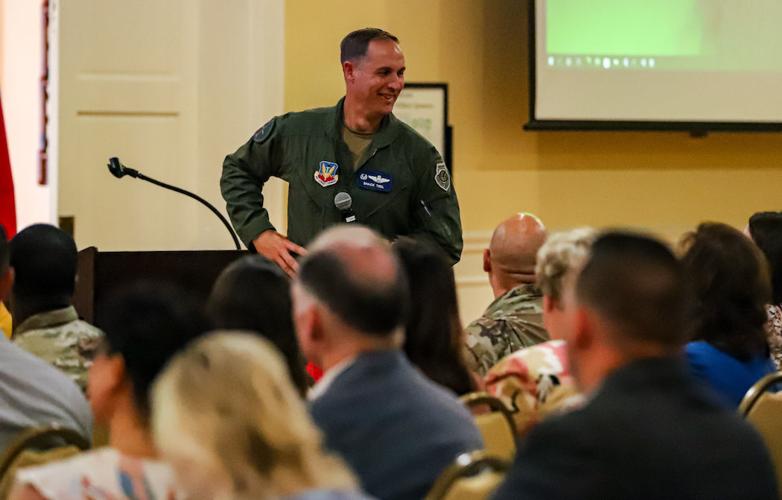 Col. Luke Teel, 4th Fighter Wing commander, talks about the unit becoming a lead wing during the annual State of the Military at the Goldsboro Event Center. 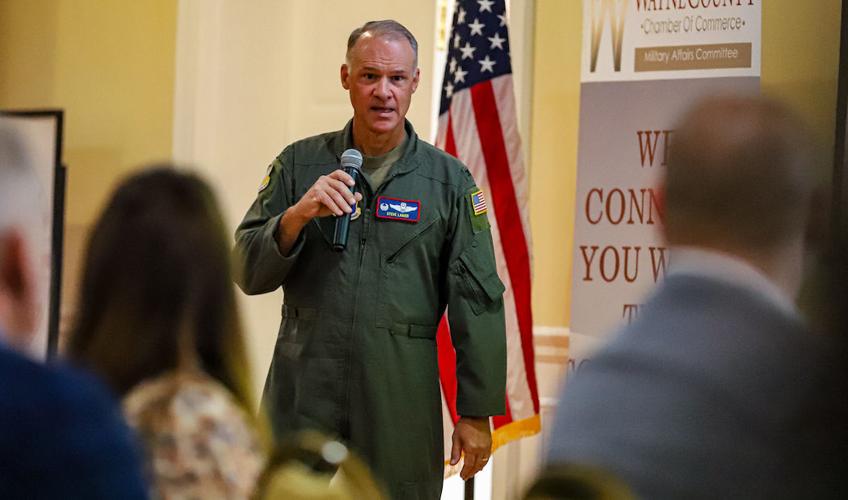 Col. Stephen Lanier, 916th Air Refueling Wing commander, gives an update on the wing transitioning from the KC-135 Stratotanker to the KC-46 Pegasus during the annual State of the Military in Goldsboro.

Col. Luke Teel, 4th Fighter Wing commander, talks about the unit becoming a lead wing during the annual State of the Military at the Goldsboro Event Center.

Col. Stephen Lanier, 916th Air Refueling Wing commander, gives an update on the wing transitioning from the KC-135 Stratotanker to the KC-46 Pegasus during the annual State of the Military in Goldsboro.

Col. Luke Teel, 4th Fighter Wing commander at Seymour Johnson Air Force Base, provided an update on the base position as a lead wing during the annual State of the Military provided each year to the local community.

Also during the event, Col. Stephen Lanier, 916th Air Refueling Wing commander at the base, talked about his unit transitioning from the KC-135 Stratotanker to the newer KC-46 Pegasus refueling aircraft.

The State of the Military, held at the Goldsboro Event Center on South Slocumb Street on Aug. 23, offered city and county leaders and area residents with insight into most-recent developments on the base.

Teel said one of the 4th Fighter Wing’s missions is to produce the next generation of F-15E Strike Eagle crews.

“We’re an air combat command base, and we produce air power,” he said.

Seymour Johnson AFB gets the F-15E aircrews up to speed, then sends them out to other F-15E wings or into combat.

One of the most important things the wing is doing now is transitioning to a lead wing.

In January, General Mark Kelly, commander of Air Combat Command, designated the 4th Fighter Wing as one of five lead wings to be ready to “rapidly generate combat power as a deployed force.”

“As a lead wing, we’re going to project air power in the near future,” Teel said. “In order to do that, I’ve got three priorities.

“The first priority is to improve our combat readiness. We need to be ready as a wing and everything that goes into it for the high-end fight.”

Teel said the wing has tents set up today on base for a wing exercise, setting up lead wing control, talking to the jets on the ground, coordinating top secret locations where airmen can set up communications and getting in touch with aircraft that are airborne.

“We have jets,” he said. “We have not enough pilots. We’re having trouble producing the amount of combat air power that we need to produce those Strike Eagle aircrews in the numbers that we need and keep mission readiness for the high-end fight against China and Russia.”

There’s a lot that goes into the process, he said.

“A lot of that is me advocating for resources,” Teel said. “But there’s a lot we need to do at our level to get as much out of these jets and these resources that we have.”

He said there’s a lot that needs to be done at the personnel level to be ready for that high-end fight.

The 4th Fighter Wing has a new force generation model with all the components that go into a lead wing.

“Think about what we’re doing,” Teel said. “We are transforming the force.

“I’ll tell you with no uncertainty that the 4FW is at the forefront in almost every single one of these lines of effort.”

He said one of the reasons for the change into a lead wing is that China and Russia monitor America’s fighting forces and know that large fixed bases are vulnerable. The Air Force is changing that entire paradigm with the lead wing concept.

“We’re taking people and they’re literally learning how to be an air staff,” Teel said.

Under the lead wing concept, base personnel will be on remote locations for six-month periods, and that includes everybody, not just the fighter squadrons. The lead wing can deploy several teams around the world.

“That is personnel who have trained as a team before deploying because they cannot be at the line of scrimmage at the last minute and think we’re going to be ready to fight China or take incoming missiles,” Teel said.

“For the last 30, 35 years at the wing level, we haven’t been doing anything like this. It’s not something the Air Force has done on a large scale since World War II.”

“Even if someone works in logistics or finance, they should know how to pick up a gun and defend themselves,” Teel said.

“There are so many elements that we have to look differently about airmen that can get them out of their comfort zone. And the feedback we get about this from airmen is fantastic when we put them in an expeditionary model.”

To become a lead wing, the 4th Fighter Wing has to build leaders.

Teel said the Air Force is going to be asking things of people than it ever used to do.

“I’m going to be putting airmen outside their comfort zone and asking senior airmen and airmen first class to take responsibility for things they wouldn’t normally be in charge of,” he said. “In order to do that, we have to develop leaders. And an expeditionary leader is a new concept.”

He showed a photo of an F-15E in Estonia where the crew thought they were going out for a “three-hour tour” that turned into a six-month deployment. They also thought they were going to be in one place but ended up going to eight or nine instead flying within 20 or 30 miles of the Belarus and Ukrainian border and getting up close and personal with Russian aircraft.

“This is a cultural change,” Teel said.

He said this is where Goldsboro and the local area partner with the base in supporting airmen and their families.

Teel said some things continue to be a challenge for airmen, including teacher shortages, challenges with school buses, some aging infrastructure, housing availability, safety and the availability and child care.

Lanier talked about the 916th ARW’s conversion from the KC-135 Stratotanker to the KC-46 Pegasus.

The 916th ARW received the first of 12 KC-46s a couple of years ago and expects to get its 12th and last one in December.

“We’ve been focused on training as we convert to the KC-46,” Lanier said. “This past year we’ve been off home station more to train on different challenges we face as we operate in the aircraft.”

The 916th has also been participating in various exercises with its new aircraft, and has been taking it to several air shows to show off its capabilities. The unit has also performed overseas training in the KC-46.

Lanier thanked the Wayne County community for its great support of the 916th.

“We appreciate all you do for us,” he said.

The Wayne County Chamber of Commerce Military Affairs Committee coordinated the State of the Military event.

Jamie Livengood, MAC chairman, said MAC started back in the 1950s with about 50 members. Today it has more than 120 members dedicated to supporting the efforts of Seymour Johnson AFB, which ultimately supports the entire community.