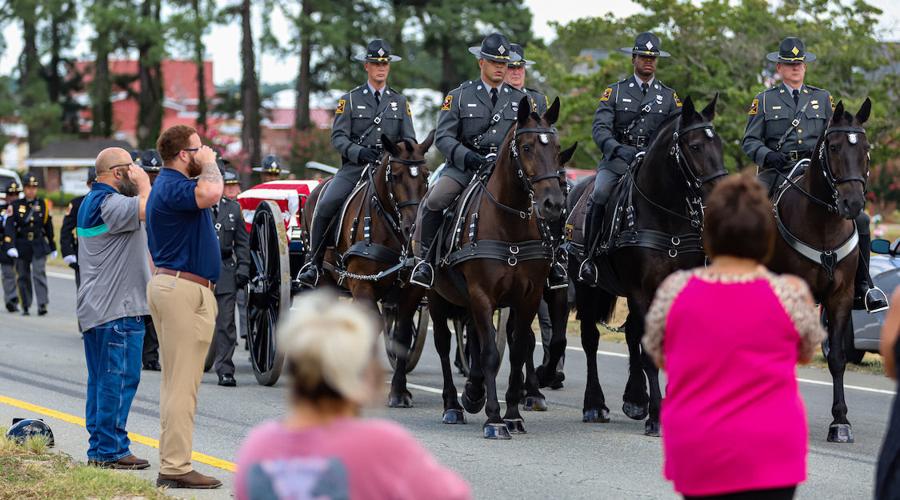 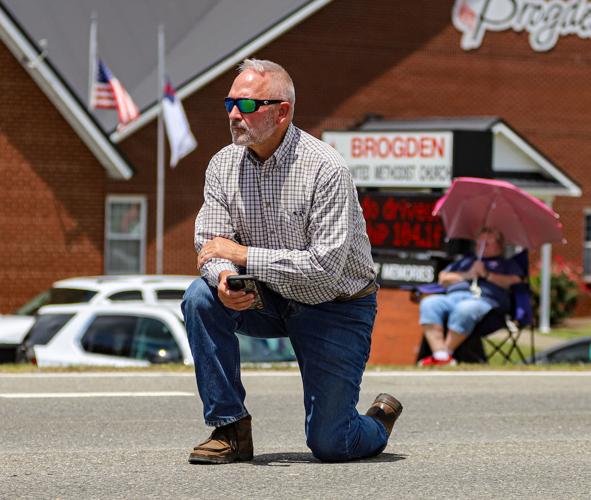 A man kneels in the middle of U.S. 117 as the N.C. Troopers Association Caisson Unit approaches to deliver the casket of Sgt. Mathew Fishman to Wayne Memorial Park on Aug. 9.

A man kneels in the middle of U.S. 117 as the N.C. Troopers Association Caisson Unit approaches to deliver the casket of Sgt. Mathew Fishman to Wayne Memorial Park on Aug. 9.

Sgt. Matthew Ryan Fishman was remembered during a memorial service as a compassionate soul who lived a life of service and paid the ultimate sacrifice in the line of duty.

Fishman was 38 and a Wayne County deputy of 12 years when he was gunned down by a Dudley man on Aug. 1. Fishman was seriously injured and died the following day.

But his love of life, desire to help others and passion to protect the innocent was remembered Aug. 9 during a memorial service that drew anywhere from 1,300 to 1,400 people inside Kornegay Arena on the University of Mount Olive campus.

First responders, including law enforcement, from across the state and beyond attended the service that also drew friends, family and Wayne County residents. The Wayne County Sheriff’s Office, which closed for business to honor Fishman, was also present, filling a large section of the auditorium.

Even more people lined U.S. 117 near Wayne Memorial Park in Dudley where Fishman’s casket, draped with an American flag, was carried along the highway and into the cemetery by the N.C. Troopers Association Caisson Unit.

Wayne County Sheriff Larry Pierce said Fishman, who had a calming personality, was “a true hero and a true law enforcement officer.”

“Sergeant Fishman was loved and respected by his shift as well as all of the men and women that served with him,” Pierce said. “Sergeant Fishman took his job seriously and he did it well. He was committed to his people and everyone on the sheriff’s office.

“Sergeant Fishman stood on that thin blue line between good and evil and he made the ultimate sacrifice.”

Pierce told Fishman’s family that they will always be part of the Wayne County Sheriff’s Office family.

Fishman’s father, Dave Fishman, who is the pastor at Trinity Missionary Baptist Church, said his son always looked out for others and was a “giver and not a taker.”

“To our family, Matthew’s blue family and this community, Matthew has given the ultimate sacrifice because of his love for us,” he said.

He shared how Fishman loved his family, always looked for ways to help his neighbor and dreamed of one day becoming a police officer.

“His name means gift of God and that he is to our family and from what I’ve been hearing and reading, he is that to many others in our community,” he said. “He did not like to see people suffer because he genuinely cares about others.”

Fishman said his son was an organ donor and the gift of his heart will allow someone else to live.

House Majority Leader John Bell, R-Goldsboro, also participated in the memorial service, which included the United States Honor Flag. The flag flew a over Ground Zero above the rubble that was once the World Trade Center on Sept. 11, 2001. The one flag has been preserved and continues to fly in support of all American heroes across the globe, Bell said.

The flag was carried by Marine Staff Sgt. Matthew Graham as a symbol of service and sacrifice during the ceremonies, Bell said.

An F-15E Strike Eagle also flew over the processional in honor of Fishman’s life and sacrifice.

Fishman is survived by his wife, children, parents, and two brothers.

The memorial service is available at https://bit.ly/3QvKQQH.